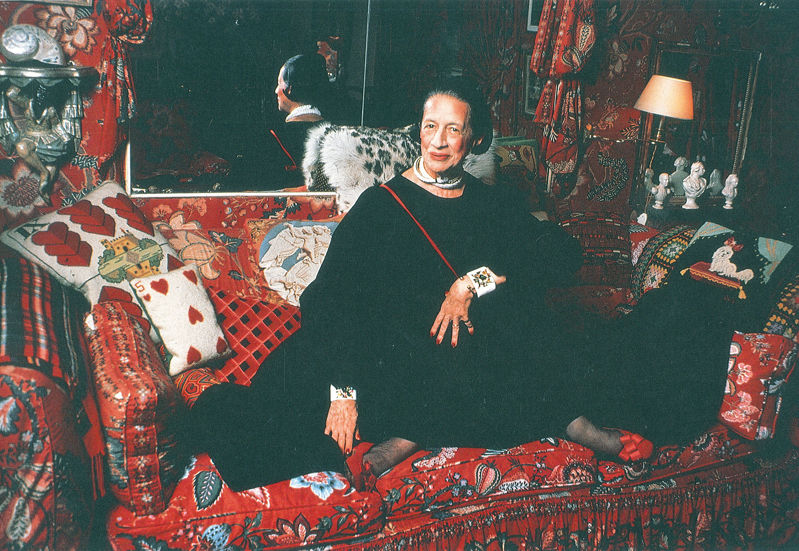 Diana Vreeland was an extraordinary woman who took the fashion world by storm in 60s. If you don’t know about her story already then you should, not just for the fashion but for the way she lead her life and inspired people. Her life has been an eye-opener for myself which can help you to learn things you didn’t know or pay attention to already.

“She would fix her gaze on somebody and then they would start to blossom.”

Once you get to know a little about her life, you will keep asking for more. She was known for her limitless vision, eye for beauty and courage to break boundaries. She saw beauty in people before they saw it in themselves. Independence, individuality and nonconformity were her core values. According to her the most important thing to avoid in life was being boring.

From one of her famous quotations “There’s only one very good life and that’s the life you know you want and you make it yourself.” she made people realize that you could make your life as fabulous and interesting as you want by focusing your vision towards it.

Professionally she was an influential fashion editor and columnist for Vogue and Harper’s Bazaar. Later she worked as a special consultant at the Costume Institute of the Metropolitan Museum of Art (MOMA).

The Eye Has to Travel

The biography book named “The Eye Has to Travel” by Immordino Vreeland, Diana’s granddaughter in law, was an attempt to compile multiple achievements of this “larger than life” woman. Diana’s conflicts with her mother lead to insecurities about her appearance and self-preservation which helped her break through as she reinvented herself into a daring and dazzling lady.

The documentary movie astonishingly portrays the life of Diana. It reveals that she was an wildly creative and dynamic woman with an infectious lust for life. Interviews with herself, famous personalities she worked with and family members explains her philosophies, shortcomings, instrumentality, compassion and vision.

I have seen the documentary countless times and it deeply motivates and inspires every-time. It gives an intense urge to create something beautiful of your own life. It’s hard not to fall in love with her personality and profound words.

1. “The only real elegance is in the mind; if you’ve got that, the rest really comes from it.”

2. “I loathe narcissism, but I approve of vanity.”

4. “Style – all who have it share one thing: originality.”

5. “Oh, but I think that thoughtfulness and manners are everything.”

6. “You gotta have style. It helps you get up in the morning. It’s a way of life. Without it you’re nobody. And I’m not talking about a lot of clothes.”

7. “It’s not about the dress you wear, but it’s about the life you lead in the dress.”

9. “Push their faults – make it the most beautiful thing about them”

10. “There’s only one thing in life, and that’s the continual renewal of inspiration.”

11. “Elegance is innate. It has nothing to do with being well dressed. Elegance is refusal.”

12. “The body must stay fit. Fit people like themselves better.”

14. “Unshined shoes are the end of civilization.” 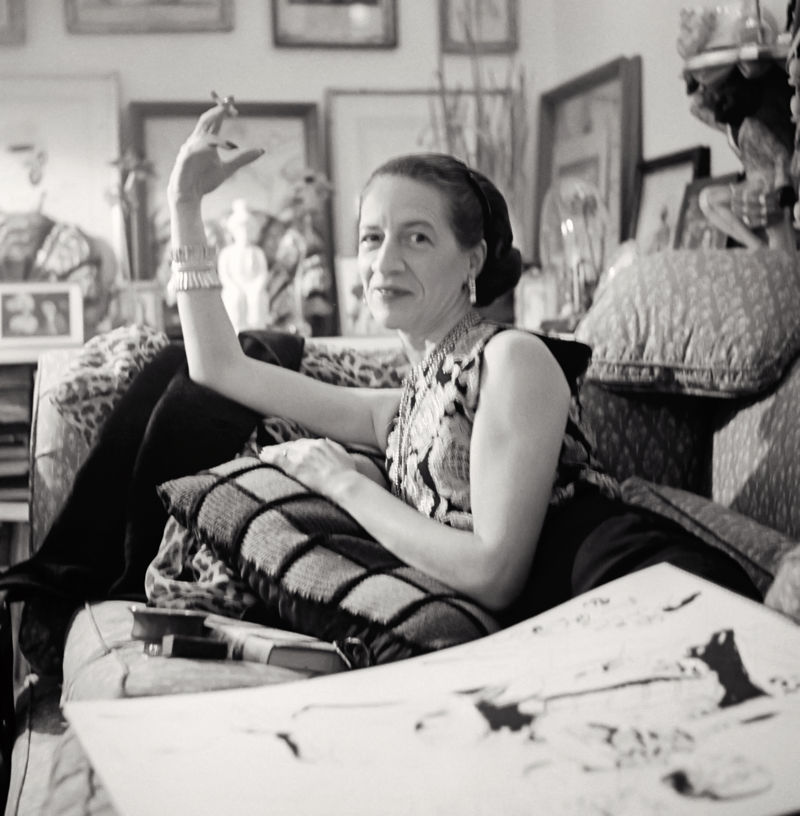 15. “I have a terrible time remembering exactly when my birthday is. Age is totally boring…”

16. “Without emotion there is no beauty.”

17. “I think your imagination is your reality.”

19. “The idea of beauty was changing. If you had a bump on your nose, it made no difference so long as you had a marvellous body and a good carriage. You held your head high and were a beauty… You knew how to water-ski, and how to take a jet plane in the morning, arrive anywhere and be anyone when you got off.”

20. “He knows the secrets of the sea, of the woods and of the vineyard. They are simple and natural worlds, beautiful and varied. He prefers them to the concrete and hard worlds built by other men. Ideas blossom very quickly, and then they are very painstakingly realized and evolved. His many harvests of thought go on and on, and the origins emanate from things as simple as a golden bluebell. Like a positive parent he gives love at the moment of creation, bowing to the beautiful things that he originates.”

22. “I’m a great believer in vulgarity – if it’s got vitality. A little bad taste is like a nice splash of paprika. We all need a splash of bad taste – it’s hearty it’s healthy, it’s physical. I think we could use more of it. No taste is what I’m against.”

23. “Never worry about the facts. Just present an image to the public.”

25. “From the time I got married at eighteen until the time I went to work in 1937, twelve years – I read. Reed [Vreeland] and I would read things together out loud, which was marvellous. That was the charm of it – when you’ve heard the word it means so much more than if you’ve only seen it.” 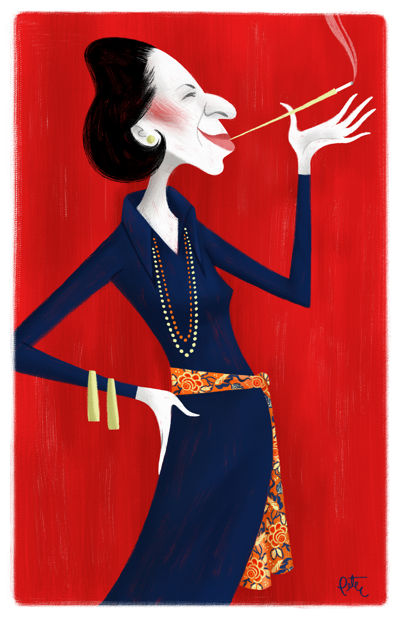 26. “Vogue always did stand for people’s lives. I mean, a new dress doesn’t get you anywhere; it’s the life you’re living in the dress, and the sort of life you had lived before, and what you will do in it later.”

27. “I’d like to have been Elizabeth the First. She was wonderful. She surrounded herself with poets and writers, lived at Hampton Court, and drove that little team of spotted ponies with long tails….She’s at the top of my list. I loved the clothes. It took her four hours to dress – we have a lot in common!”

28. “Fashion is part of the daily air and it changes all the time, with all the events. You can even see the approaching of a revolution in clothes. You can see and feel everything in clothes.”

29. “Balenciaga often said that women did not have to be perfect or beautiful to wear his clothes. When they wore his clothes, they became beautiful.”

30. “One never knew what one was going to see at a Balenciaga opening. One fainted. It was possible to blow up and die.”

31. “Don’t think you were born too late. Everyone has that illusion. But you aren’t. The only problem is if you think too late.”

32. “I was always fascinated by the absurdities and luxuries and the snobbism of the world that fashion magazines showed. Of course, it’s not for everyone…But I lived in that world, not only during my years in the magazines business but for years before, because I was always of that world – at least in my imagination.”

33. “All my life I’ve pursued the perfect red. I can never get painters to mix it for me. It’s exactly as if I’d said, ‘I want rococo with a spot of Gothic in it and a bit of Buddhist temple’ – they have no idea what I’m talking about. About the best red is to copy the color of a child’s cap in any Renaissance portrait.”

34. “I was the most economical thing that ever happened to the Hearst Corporation. Perhaps they loved me because I never knew how to get any money out of them.”

35. “Fashion must be the most intoxicating release from the banality of the world.”

36. “I think when you’re young you should be a lot with yourself and your sufferings. Then one day you get out where the sun shines and the rain rains and the snow snows and it all comes together.”

We use cookies on our website to give you the most relevant experience by remembering your preferences and repeat visits. By clicking “Accept”, you consent to the use of ALL the cookies.
.
Cookie SettingsAccept
Manage consent

This website uses cookies to improve your experience while you navigate through the website. Out of these, the cookies that are categorized as necessary are stored on your browser as they are essential for the working of basic functionalities of the website. We also use third-party cookies that help us analyze and understand how you use this website. These cookies will be stored in your browser only with your consent. You also have the option to opt-out of these cookies. But opting out of some of these cookies may affect your browsing experience.
Necessary Always Enabled
Necessary cookies are absolutely essential for the website to function properly. These cookies ensure basic functionalities and security features of the website, anonymously.
Functional
Functional cookies help to perform certain functionalities like sharing the content of the website on social media platforms, collect feedbacks, and other third-party features.
Performance
Performance cookies are used to understand and analyze the key performance indexes of the website which helps in delivering a better user experience for the visitors.
Analytics
Analytical cookies are used to understand how visitors interact with the website. These cookies help provide information on metrics the number of visitors, bounce rate, traffic source, etc.
Advertisement
Advertisement cookies are used to provide visitors with relevant ads and marketing campaigns. These cookies track visitors across websites and collect information to provide customized ads.
Others
Other uncategorized cookies are those that are being analyzed and have not been classified into a category as yet.
SAVE & ACCEPT
Send this to a friend